Mexico Ferry Travel: Getting from Guaymas to Baja and Back

Ferry travel is not cheap or easy in Mexico.  We arrived at the 8PM ferry  (Guaymas – Santa Rosalia) on Saturday May 27th at 6PM, as required.  There had been some pretty strong northerlies for a few days and the ferry isn’t very big so we asked if it was definitely going to sail. They said yes so our friend, Ray, who had given us a ride from San Carlos, left.  At 7:45 they decided the weather was too bad to go – next ferry would be Monday (maybe). We took a taxi back to the boat and decided to wait until Tuesday the 29th.

This time we had Ray ( who speaks fluent Spanish) call and make a reservation in a cabin for us for Tuesday.  We arrived at 6PM. They had our reservation and we had a whole cabin to ourselves. The ferry left late, but it was a calm ride and we slept most of the way.

When we arrived at 7:30 am in Santa Rosalia we thought we were probably too late for the bus to Puerto Escondio, but the bus was late so we were on our way to PE about 20 minutes after the ferry landed.
We arrived at the PE stop about noon and hiked the mile from the highway to PE (it was 100 degrees). We picked up the car  and headed to La Paz. With a lunch stop in Constitution we arrived at Casa Buena in La Paz (a great, reasonably priced place to stay) about 5:15 on the 30th. Time for a dip in the pool and dinner at Rancho Viejo.
The next day  (31st) we needed to take care of getting our ferry tickets and a Temporary Import Permit for the car (not needed in Baja or the state of Sonora, but we were taking the ferry to Topolabompo in the state of Sinaloa).  The ferry dock is in Pichilingue – about 30 minutes from La Paz.  Our plan was to take the Saturday  (June 2) ferry because it was a night ferry which would put us into Topolobompo in the morning and then we would drive to El Fuerte where we would catch the Copper Canyon train.  As it turned out the schedule changed on June 2nd and there would no longer be a night ferry.  We bought the tickets anyway and got the TIP all in one place – it was quite easy.

Now we had a few days to hang out in La Paz, visit friends who were still there, and relax. It was a fun 3 days. 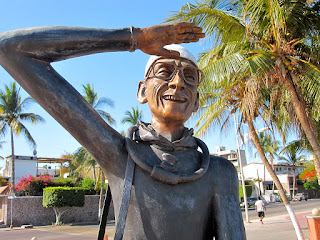 We got to the ferry at 10:30AM and it was supposed to leave at 1PM. It didn’t leave until 3PM and we arrived in Topolabompo about 11:30PM. By the time we found a hotel in Los Mochis it was 12:30. We drove to El Fuerte the next morning. 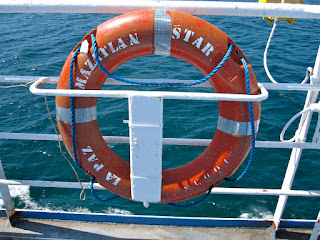 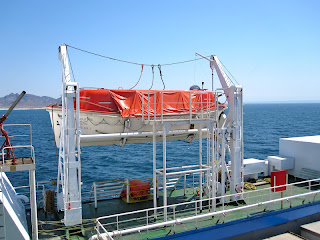 Driving on this ferry was quite an experience – nothing like the WSF system. It is mostly big trucks and hardly any cars. The trucks are very close together and they squeeze the cars in the gaps (picture parallel parking).  To get to the upper deck and back to the car you literally have to crawl under the trucks and over the chains that are holding them in place.  Once we got upstairs it was quite nice. We were assigned seats in an air-conditioned salon where movies were continually playing – most were dubbed AND subtitled in Spanish (good way to improve our Spanish). There were nice outside decks and a restaurant.  It was actually quite pleasant.

So that’s our ferry adventure. Next blog entry will be our Copper Canyon adventure

Popular posts from this blog

Back in Agua Verde


José also has a new dog named Mocha. She's very friendly, but not a retriever. We found a tennis ball and threw it to her from the dinghy, but she didn't have a clue what to do with it:


The restaurant run by the "Sociedad Cooperativa Punta Pasquel" is getting better all the time. The fish tacos are the best and the chile rellenos and chicken mole are also great. The tortillas are the best around!

December 14, 2019
We arrived in San Carlos on October 13th, worked on Loomba-Loomba in the work yard for a week, launched on October 21 and moved to the marina where we worked on getting the boat ready to go while waiting for a good weather window. We left Bahia San Carlos on November 5th heading across for San Juanico on Baja.


We were in San Juanico for a week: